Let’s be honest: people don’t really care about politics, and when they do it’s just to shout at BBC news or Question Time before they’re thinking of more important things 20 minutes later. So, if you're going to bring up 2013 most people might only add the coalition government or its controversial policies as an afterthought.

Instead most people are going to think of it as the year selfies became a thing, ugg boots were still (barely) a thing, Prince George was born, a Glee star died after a heroin overdose or when Miley Cyrus made headlines by swinging naked on a wrecking ball. Get Lucky by Daft Punk was all anyone heard on the radio for a whole summer, Blurred Lines creeped everyone out, Daniel Day-Lewis shocked nobody after winning the Oscar following a highly praised performance in Lincoln and Frozen was released, making the lives of parents miserable everywhere.

But in Britain, 2013 was a period when things were beginning to change. The Conservatives started to get their game on, the Scottish Independence referendum would be announced and would loom in the background and UKIP are becoming a major political force as discontent for the established order and the European Union is slowly growing amongst the British public and, naturally, within the Conservative Party. Of course, this could end a lot differently. That’s the point of the game.

The political backdrop in 2013 is arguably defined by three events that had happened throughout the 2000’s. Despite being years ago, they still lurk in the nation’s psyche and profoundly influence how politics is operated in Britain. Though you may not find yourself mentioning them, with every policy decision you make you’re likely going to have to consider how they will stand the test of time with these events in consideration:

It’s been more than a decade since 9/11 has happened – and yet 9/11 marked a shift in Britain’s psyche that (to this day) hasn’t changed. America had always felt invincible, and wide scale disaster and huge terrorist attacks were seen as things that happened in faraway countries. When Brits, or the rest of the world, saw two of the most iconic structures collapse and thousands of innocent people die in New York City, there was a new sense that nowhere, not even home, was safe.

This feeling was often validated in the minds of the British public following terrorist attacks in Britain (the two most noteworthy ones being 7/7 and, more recently, the murder of Lee Rigby). When people think of terrorists it’s no longer Irish people, but Muslims – or if we’re being honest anyone whose skin tone is a little darker and their clothing perhaps a bit more exotic. 9/11 also intensified Home Office orthodoxy – which already relatively authoritarian in tone on both the Labour and Conservative side. On the flipside, those who champion civil liberties have found their cause and their resolve strengthened following 9/11 and what they see as a flurry of policies that eroded fundamental civil liberties.

Really, though, if we’re being honest 9/11’s most profound impact was how it led to Britain (and the USA) to act on the global stage – I debated making The War on Terror and the I(raq)word we’re all keen to avoid their own section, but they’re indirect products of what happened following 9/11. 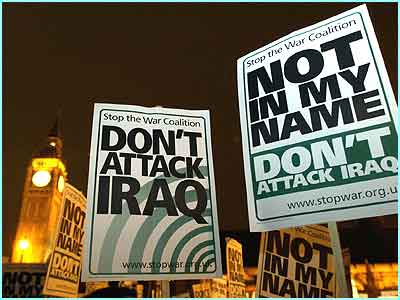 Iraq was a monumental event and its impact can’t be overstated: it's still considered by many to be the worst foreign policy flunk since Suez, with an impact nearly as wide ranging. It was the last war to commandeer the support of the British public whilst also being the war that broke British support for interventionism and fractured British trust in established institutions such as the secret services – arguably, people were sick of experts in 2003, long before Brexit. But on political trust, we move onto –

Because people may have believed MPs were self-serving, but there were exceptions: MPs are awful, but coincidentally my MP is okay, or my party is okay. The media were a lot more complacent in how they treated MPs, and operated under the assumption that MPs might be hapless, or incompetent, or hold views that are downright dangerous, but most of them are decent people – right?

Wrong, apparently. A lot of this changed when, after a High Court battle in relation to Freedom of Information and MPs expenses was waged all through 2008, details related to MPs expenses were finally released. There was a media storm and MP after MP was exposed for using public money to install an expensive fishpond in their third home (not true), or maybe buy some pornography for their husband (is true). Though you can track multiple events that withered away at public trust in their elected representatives: the sleaze of the 90’s, the Blair spin of the 2000’s, Iraq, more recently the Liberal Democrat tuition fee fiasco, the major shift happened after the expenses scandal, with a different MP facing unrelenting and intense scrutiny every week.

What made the expenses scandal different was that no party had clean hands, and figures from across every party – junior to senior – were caught up in it (though naturally the government got the most stick). Similarly, every party or individual within that party could now agree there was a broken system and multiple reforms have been passed (Independent Parliamentary Standards Authority) or proposed/strengthened in popularity (electoral reform, shrinking the size of the Commons etc). It’s arguable that the expenses scandal didn’t really introduce new perceptions about MPs, but it was the ultimate validation the public needed. When you play, you have to remember for better and for worse you will always be put on a pedestal: being on your best behaviour isn’t enough, you have to exceed that. Even human mistakes won’t be forgiven by a press and public braying for blood. So I said however profound these events were, it’s not likely you’ll mention all of them by name – the financial crisis is probably going to be an exception (though even then, probably not by name, ‘Labour’s mess’, ‘the bankers’ reckless gambling of our economy’ etc). That’s because the financial crisis’ effect is very much still in people’s minds and their wallets.

There’s been a pretty good state of the economy thread already written that goes into this more than I could, but we all know the lowdown: banks were a bit naughty and this led to a rubbish situation which didn’t do any good for anyone and the UK is left with a pretty big deficit.

Once again, this has led to a huge breach of trust with the established order and parties have all come up with their own response. The Conservative-Liberal Democrat coalition government have implemented deep cuts, and Labour’s standing on the economy is profoundly damaged. For the left, though, there is a glimmer of hope: the economic model that underpinned established thinking is under more scrutiny than ever. Most people do think that a laissez faire attitude and a model that focuses on the economy being dependent on financial services in London is no longer right or sustainable. Unfortunately for the left, there’s also space for the right to fill in their own narrative, which the Conservatives have done with little success yet. This battle for hearts and minds will potentially be the most important one through the round and will define politics for years to come.

Another important consequence, though, especially for those in government is that things aren’t going to be easy and you’re going to have to make some bloody difficult choices. In the 2000s, people felt they could have their cake and eat it: they could keep taxes and debt relatively low while investing in public services. It’s not going to be like that anymore.

The public mood in 2013 is really the same as it was in 2011, or 2010, or 2008, or 2009, though with every breach of trust it intensifies and nobody knows when it will culminate: as politics gets more tumultuous the only real consensus is that things can’t carry on as they are. This can have profound implications on the left, centre and right of British politics, and on the public as a whole. Ultimately, there’s a sense that something has got to give. What that is will be largely up to you, the playerbase.

Really there’s a bunch of stuff I haven’t included in as much detail, but even all of that stuff can be underpinned, directly or indirectly, by these three events and the discontent they’ve caused. The two honourable mentions are the Scottish Independence debate and also the European Union membership debate. I’m sure they’ll ultimately be uneventful, right?