Welcome, one and all, to Politics UK. You will find some basic information and how to sign into the game here.
Post Reply
1 post • Page 1 of 1 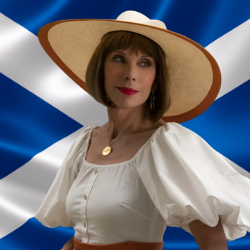 Education: Attended her local state school, primary and secondary, before winning a scholarship to the University of Edinburgh to study Politics and History.
Career: Taught at the secondary school which she had previously attended, becoming Head of History.
Political Career: First selected at the age of 29 for her home seat of Galloway and Upper Nithsdale (formerly Galloway), she resigned from her teaching post to concentrate upon winning the election. Elected with a majority of just over 5,000, she rose quickly through the ranks of the Conservative Party, becoming a defining voice for the party's "wets." Following the resignation of Margaret Thatcher, Aylward was promoted to the frontbench as Secretary of State for Education under John Major. In 1997, as the Labour Party swept through Scotland, Aylward was unseated. In 2001, she was re-elected in her home seat and was immediately given a seat in the Shadow Cabinet as the Shadow Secretary of State for Scotland. In 2005, facing tough competition from the Labour Party in her newly created seat of Dumfries and Galloway, she was moved to the neighbouring constituency of Dumfriesshire, Clydesdale and Tweeddale and won handily. She has held the seat ever since.

Biography:
Cynthia Andrea Aylward, born Cynthia Andrea Crawford on August 10th, 1952, is the only child of Jack and Joanna Crawford. Her mother and father, both schoolteachers, were from Scottish working-class stock, the former born in Leith and the latter born in the Borders. From a young age, Aylward was ambitious. She attended Galloway School for Girls, a state school, where both of her parents worked, and graduated top of her class. From here, she won a place at the University of Edinburgh to read Politics and History. It was here that she joined the Conservative Association and her passion for politics was truly ignited. After graduating in 1972, she returned to the Borders and began teaching History at Galloway School for Girls. She became Head of the department in 1976 and, in 1980, she was selected as the Conservative candidate for Galloway and Upper Nithsdale.

The majority at the 1979 election was narrow - just over 1000 - and given the unpopularity of the Thatcher government in the lead-up to the 1983 General Election, it was widely forecast that Aylward would lose the seat. However, following a bounce from the war in the Falkland Islands, Aylward was elected with an increased majority. Once elected, she was openly critical of the Thatcher government's approach to what she considered to be overly austere public spending and was termed an early leader of the "wets" faction within the backbench Conservative Party. She was re-elected in 1987 with a slightly reduced majority and, after Thatcher's downfall, became Secretary of State for Education in 1990. Going into the 1992 General Election, Aylward was hotly tipped by bookmakers to lose her seat to an insurgent SNP who had focussed upon her seat as a symbol of Westminster's oppression of Scotland. However, she did not lose, and remained Education Secretary until 1997.

In 1997, after seven years on the frontbench, the SNP successfully painted Aylward as a Tory stooge in Scotland who, after all these years, was not welcome. They succeeded, and she lost her seat on a massive swing away from the Conservatives. Despite this, her ambition was not dulled. She ran again for the same seat in 2001 and, after knocking on over 14,000 doors in the intervening years, won the seat with a majority of just 14. She famously said that it was the happiest day of her life, despite being stood next to her (rather miffed-looking) husband. Following her re-election, she was appointed Shadow Secretary of State for Scotland. She remained in the post under successive Conservative leaders, but as the 2010 General Election approached she stood down from the Shadow Cabinet, saying that she wanted to spend more time with her family and her friends on the backbenches.

Since 2010, with the Conservatives in government, Aylward has been a strong voice on the backbenches for progressive conservatism, often speaking out against some of the government's more austere measures. She opposed cuts to legal aid and education and was vocally opposed to Michael Gove's reforms of the education system. Despite this, Aylward is a mainstay on the Conservative backbenches and is often seen as one of the friendlier Conservatives. She has spoken about the dramatic need for bipartisanship in the House of Commons and has worked across the aisles on many issues that are close to her heart. In 2014 she was opposed to Scottish independence and campaigned alongside the Better Together campaign, and in 2016 she was in favour of the country's membership of the European Union. She is good friends, however, with Nicola Sturgeon, and has often been seen stumbling out of many an Edinburgh cocktail bar.

The bitch is, as they say, back.

"They went into my closets looking for skeletons, but thank God, all they found were shoes, beautiful shoes." - Imelda Marcos.
Top
Post Reply
1 post • Page 1 of 1